Our people are fundamental to our growth. It is our strong belief that the skills, diversity and dedication of our people are key to our success. The global nature of our customers and our business means that our people have to be capable of teamwork across geographies. They need to be flexible and open minded, to have world-class capabilities and shared values.

Our employees come from different cultural backgrounds, countries and ethnicities. We promote equality and diversity by  treating our employees fairly and equally irrespective of their race, gender, disability, religion or belief, sexual orientation and age.Our work culture fosters individual growth, team spirit and creativity to overcome challenges and attain goals.

Cooper Technology is committed to apprenticeships and developing our workforce. We are endorsed as an Apprenticeship organisation by the  National Apprenticeship’s Service (NAS). We can offer you the chance to ‘learn while you earn’, and take you through every step of your career with us.

Apprentices learn on the job, building up knowledge and skills, gaining qualiﬁcations and earning money all at the same time. Maybe you are just starting on your career path, looking for a fresh new challenge or you are seeking a change in your career and the opportunity to retrain. Cooper Technology can open doors to fantastic career development and qualifications.

There are no vacancies currently available at Cooper Research Technology.  However this does not mean that we won’t have a vacancy that suits your skills and experience in the future. We regularly update our vacancies to reflect our recruitment needs, so to make sure you don’t miss out on an opportunity, please check this page.

We would like to thank you for your interest in our company.

Sponsorships
As part of our overall commitment to corporate social responsibility, Cooper Technology select for funding those national and international organisations whose programs or projects best fit into our organisation.

The Cooper Asphalt Engineering Award 2011 for best student in Asphalt Engineering Group, Year 2 & 3 was given to Jason Howells of Petroplus Bitumen. The award was presented by Roger Edwards, UK Business Development Manager of Cooper Technology during the National Conference 2011, held by Institute of Asphalt Technology (IAT) on 30th June 2011, in Sutton Coldfield, United Kingdom

The nationally recognised Asphalt Technology course at Derby University which develop technical skill and knowledge of asphalt related industries and their impact upon the environment is the only UK vocational qualification with around 200 students over the 3 years. It was an obvious choice as part of Cooper Technology 20 years anniversary celebration.

The Cooper Asphalt Engineering Award 2010 for best student in Asphalt Technology and Pavement Design was given to Robin Hall of Aggregate Industries in the examination approved by the Institute of Asphalt Technology IAT. It was presented by our Director of Research, Andrew Cooper, during the IAT ceremony taking place in Dublin, Ireland, June 9th, 2010. Robin will have the pleasure to visit one of the most prestigious European laboratories that perform asphalt testing on Cooper Technology equipment. 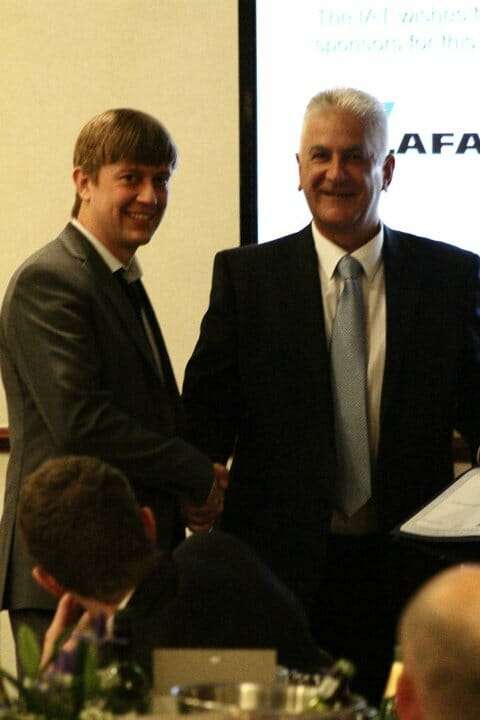